Entrepreneur of the Week : Michael Dell

This site as just named Michael Dell ad the Entrepreneur of the Week. This Entrepreneurship and Highest money making personality of the week is based on result on polls from Earn Online Readers. 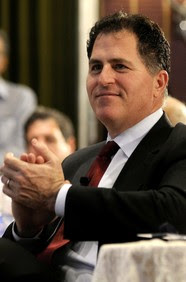 Michael Dell as contributed to the growth of the Tech World and computers generally with a current Net Worth of $15.3.

Kudos to Michael Dell for being Earn Online Entrepreneur and Highest Earner of the Week.