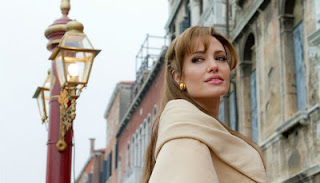 Angelina Jolie has been named Hollywood's highest-paid actress in Forbes' magazine's annual list of top female earner – despite not having appeared in a movie since 2010.

Jolie tops the poll with earnings of $33 million (£21.5 million).
Hot on her heels, however, is 22-year-old Jennifer Lawrence, who coined in $26 million over the same period from June 2012 to June 2013, starring in a slew of hits.
By rather stark contrast, Jolie's last films were 2010's critically hammered 'The Tourist' with Johnny Depp, and the roundly unloved spy thriller 'Salt'.

Oddly there was also another sturdy two-year gap between her films before that, with 'Changeling', 'Wanted' and 'Kung-Fu Panda' in 2008.

But with Jolie able to command $15 million per role – the sum she has reportedly received for 'Maleficent', out next year – and endorsement for Louis Vuitton worth $10 million, she's placed at the top of the Hollywood heap.

Jolie has in recent years devoted more time to her humanitarian pursuits – as a special envoy to the United Nations – than her movie career, as well as being a mother to her six children with Brad Pitt.

Earlier this year Jolie also announced that she had had a double mastectomy to reduce the risk of her contracting breast cancer, though remarkably this scarcely affected her workload.

Meanwhile, Kristen Stewart, who topped the Forbes list last year thanks almost entirely to the 'Twilight' series, has now slipped to number three, with earnings of $22 million.

Jennifer Aniston comes in at fourth, while fifth place is 'The Amazing Spider-Man' star Emma Stone.