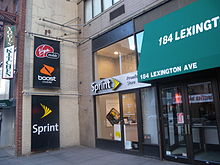 2.Verizon wireless :is a mobile network operator that offers wireless voice, messaging and data products and services to customers in the United States. Verizon Wireless is the largest wireless communications services provider in the United States with 108.7 million subscribers as of the end of 2011
3.At&t : provides wireless services to 103 million subscriber in the United States, including Puerto Rico and the U.S. Virgin Islands. AT&T Mobility is the second largest wireless telecommunications provider in the United States and Puerto Rico below Verizon Wireless, which has 108.3 million customers as of the third quarter of 201
4.T-mobile :T-Mobile USA, Inc. is an American mobile-network operator, headquartered in Bellevue, Washington, that provides wireless voice, messaging and data services in the United States, Puerto Rico and the U.S. Virgin Islands. The company is the fourth-largest wireless carrier in the U.S. market with 33.73 million customers and annual revenues of US$21.35 billion and its nationwide network reaches 96 percent of Americans
5.Telkom  :is a wireline and wireless telecommunications provider in South Africa, and operating in more than 38 countries throughout the African continent. Telkom is a semi-privatised, 39% state-owned company.According to the World Factbook, it is the "best developed and most modern in Africa". It consists of local copper loops, microwave and fiber optic loops, and wireless connections.
6.Mtn :s a South Africa-based multinational mobile telecommunications company, operating in many African and Middle Eastern countries. Its head office is in Johannesburg.learn how to get latest update using mtn
7.Airtel : is an Indian telecommunications company that operates in 20 countries across South Asia, Africa and the Channel Islands. It operates a GSM network in all countries, providing 2G, 3G and 4G services depending upon the country of operation. Airtel is the world's fourth-largest mobile telecommunications company with over 246 million subscribers across 20 countries as of March 2012. It is the largest cellular service provider in India, with over 187.30 million subscribers,also Airtel operates in 16 countries in Africa.
8.Etisalat :is a UAE based telecommunications services provider, currently operating in 18 countries across Asia, the Middle East and Africa. As of February 2012, Etisalat is the 15th largest Mobile network operator in the world, with a total customer base of more than 135 million. Etisalat was named the most powerful company in the UAE by Forbes Middle East in 2012.See etisalat data plans for smartphones.
9.Glo :Globacom Limited (or GLO) is a Nigerian multinational telecommunications company headquartered in Lagos, Nigeria. GLO is a privately owned telecommunications carrier that started operations on 29 August 2003. It currently operates in 4 countries in West Africa namely Nigeria, Republic of Benin, Ghana and Ivory Coast. As of June 2009, the company has employed more than 2,500 people worldwide.
10.Boost  mobile :is a pre-pay wireless service provider in the United States, a wholly owned subsidiary of Sprint Nextel Corporation, based in Irvine, California. Boost Mobile provides nationwide, wireless services using Sprint's CDMA, iDEN, and WiMAX networks. Boost Mobile does not require its customers to agree to an annual contract to purchase any of its products and services.
The phone services above are the top rated and if you feel the one in your country is not included feel free to use the comment box and let have some additional ones.Thanks