Facebook and Twitter are the biggest social network service in the world with millions of subscribers and users.These sites create so much impact in the world in terms of business,entertainment and communications by allowing you to share and connect with friends and loved ones.Despite facebook is older than twitter but twitter is also gaining some good popularity in the whole world especially Japan. 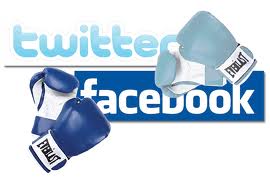 Facebook: facebook has over 900million users and was ranked number 2 by alexa .Facebook allows plain text,wall post,likes,pokes,status,instant messenger,video calls,voice call,gift cards,market place and other social apps on phones like Nokia,Smartphones,Blackberry,Ipads and Andriod devices.see how facebook like button to your site Facebook has also created so much impact not only in entertainment but in politics,sport,business and related areas.
Twitter: twitter was created few years after facebook with over 500million users.This site was ranked 8 by alexa and it allows users the ability to update update their profile using mobile phone text messaging or apps by smartphones or tablets inform tweets.see how to add follow@twitter widget to your site
Promotion :Both site have helped many individuals or corporate firm to gain more recognition by promotion or adverts.But facebook is well defined in terms of its service called facebook ads where images of advertisers are place on users page while twitter also do paid advertisement by posting related tweets of advertisers by your tweets.see free advert placement
Discussion: for advertisers facebook ads is more important because every product advertised get to millions of people using facebook while site owners tends to get more traffic with twitter because there is no limitation to the number of twitter followers you can get.Imagine someone with 500,000 twitter followers,such will get thousands of traffic from it followers compared to restriction on facebook But to be candid,both facebook and twitter have help the world in both communication and entertainment.what do you think?
Visit earnonlineng regularly for useful and interesting updates better still drop your comment and let hear your view.Thanks